With the Holidays fast approaching, you (like many around the world) may be celebrating at a time when alcohol consumption is at its highest. There will be lots of Public Service Announcements (PSA) telling you to drink responsibly and not to drink and drive. Bodymatter would like to add its own PSA: Alcohol may be harmful to a goodnight’s sleep. If you are tracking your sleep and rarely consume alcohol, don’t be surprised if you awaken in the morning feeling less rested after a few spiked eggnogs.

For years, people have been under the impression that a drink after work or a nightcap at bedtime would help them relax or—perhaps better yet—get a good night’s sleep. In fact, 20% of Americans currently use alcohol as their preferred sleep aid. Scientific evidence points to the fact that alcohol has complex effects on our sleep and in aggregate is detrimental to our health.

How Booze Affects your Z’s

The effects of alcohol on the brain are complex and have two distinct phases. Initially, alcohol acts as a stimulant. Your brain is flooded with endorphins which make you feel good and more self-confident—perhaps more talkative at that holiday party and less socially inhibited than we might otherwise be. Later, after alcohol has been in the system for a while, the stimulating effects wain and become sedating. Some recent research suggests that the stimulating effects of alcohol may be magnified during the early evening and bedtime. While it has been assumed that alcohol affects sleep by altering the circadian rhythm, recent studies suggest that alcohol may interfere with the body’s system for regulating sleep.

Restful sleep requires our brains to cycle every ~90 minutes through the various phases of sleep. Alcohol disrupts this pattern. Alcohol will generally reduce the time it takes to fall asleep and it will increase the amount of deep sleep you get during the first half of the night. However, as your blood alcohol level drops, your sleep becomes less restful for the remainder of the evening and your REM sleep is markedly diminished.

We asked you—the global SleepWatch community—whether you had consumed alcohol prior to sleep on particularly restful or unrestful sleep sessions. After sampling and analyzing thousands of nights, the results are in…

The data shows that alcohol consumption prior to sleep has a particularly strong impact on our heart while we sleep.

Notably, the data shows that consuming alcohol prior to sleep is associated with a 10% increase in Average Sleeping Heart Rate. Those who reported consuming alcohol prior to sleep had an Average Sleeping Heart Rate that was nearly 7 beats per minute faster than those who didn’t. That means that when we choose to booze, we may be forcing our heart to beat an extra 3,000 times during the night. Over a lifetime, that might add up. The data on the chart below shows the Average Sleeping Heart Rate for the population of users that reported consuming alcohol prior to sleep and for those who didn’t. Having an occasional alcoholic beverage is quite common, but beware of its negative impact on your night’s sleep. If you rely on a nightcap to induce sleep, it’s probably time to re-consider. 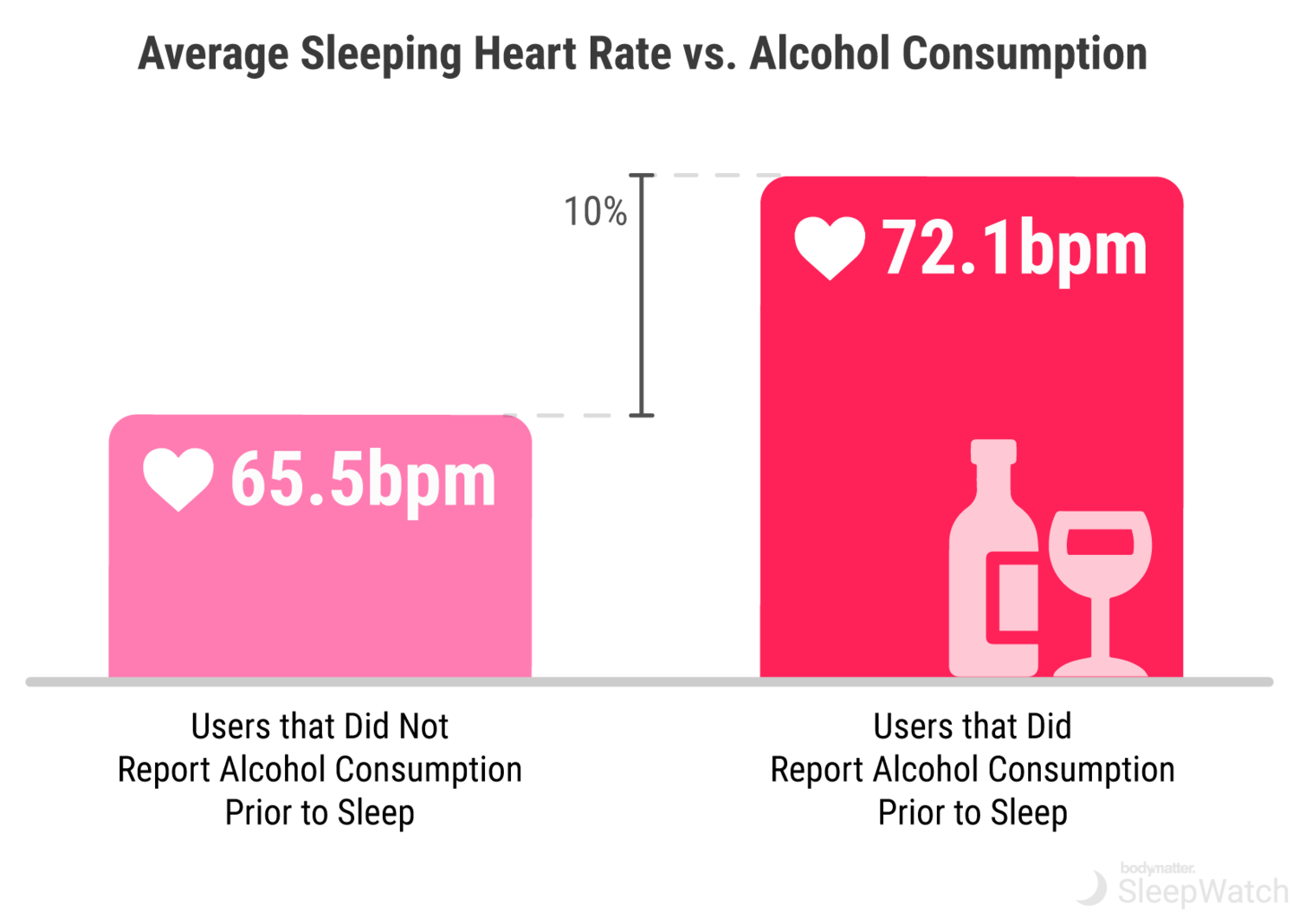